January 1, 2020 marked the official legalization of recreational marijuana use in the state of Illinois. Joining Washington, D.C. and ten other states that have allowed recreational sales of marijuana, Business Insider reports that it took only seven months between the time Illinois Governor J.B. Pritzker signed a legal marijuana bill into law before dispensaries began opening up. According to an article in TIME, many consumers began to line up hours before the opening of dispensaries on Jan 1st to take advantage of the new law.

Like marijuana legislation in many other states, this new bill also contains several other components that may have significant impact, including language that may allow for the expunction of 770,000 marijuana possession convictions and the creation of new opportunities for minority business owners. Having already issued 11,000 pardons for low-level drug offenses, Governor Pritzker stated the reasoning behind this was to “right some historic wrongs”, referring to the war on drugs that disproportionately targeted and negatively impacted so many minority communities (Chicago Reporter).

A 2019 survey conducted by the Pew Research Center revealed that the number of U.S. adults who are against the legalization of marijuana dropped from 52% to 32% in just 10 years. Additionally, while the discrepancy between support for legalization of just medicinal use (32%) or both medicinal and recreational use (59%) was more apparent, only 8% supported keeping the drug illegal in all aspects. The average two-thirds of respondents supporting legalization was repeated in several demographic breakdowns, with the exception of generational and partisan views. 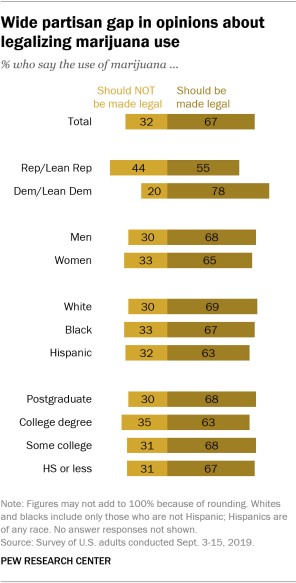 New York and New Jersey will most likely be the next states to pass marijuana legislation. Both Governors Cuomo and Murphy have been very vocal about their push to pass marijuana reform. Connecticut is one of only three New England states who have yet to legalize marijuana beyond medicinal use. How do you feel about the potential legalization of recreational use of marijuana in CT? Do you think that will increase impaired driving crashes?

2 thoughts on “Recreational Marijuana Use Legalized in Illinois”

© Marisa Auguste and driversbehavingbadly.blog, 2021. Unauthorized use and/or duplication of this material without express and written permission from this site’s author and/or owner is strictly prohibited. Excerpts and links may be used, provided that full and clear credit is given to Marisa Auguste and driversbehavingbadly.blog with appropriate and specific direction to the original content.