The field of psychology and the subjects that are studied within the discipline continue to grow and flourish as humans, and social interaction evolves. Several lenses are used to examine and define how humans feel, think, and behave. Contemporary psychological research has identified seven distinct perspectives. Although most psychologists practice using material and knowledge from multiple perspectives for a well-balanced point-of-view, each area emphasizes a different approach for examining the same topic: the psychological state of mind. 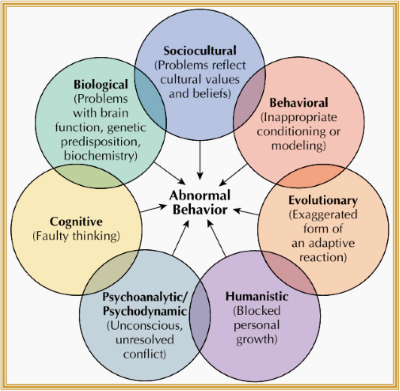 Psychologists who practice under the biological perspective base their explanations of behavior on three main causes: genetics, hormones, and neurotransmitters. Genetic predispositions and the body’s nervous and immune systems are thought to influence feelings of aggression or anxiety. Focus is given to the different processes of the brain and body and their effect on behaviors and emotions. This perspective could be helpful when analyzing the differences between male and female driving patterns. Young males are over-represented in crash data in nearly every crash type, whether speeding, impaired driving, or unrestrained crashes.

The theory of natural selection is the basis for the evolutionary perspective. This view suggests that by gaining a better understanding of the adaptation problems that plagued our hunter-gatherer ancestors during their evolution, “researchers can uncover the detailed functional designs of the emotions, reasoning mechanisms, and motivations that human evolution produced” (3). Within traffic psychology, theories about the evolution of reciprocation can help us understand the discord between drivers, pedestrians, and cyclists. Expectations of social exchange based on years of evolution are frequently violated in the driving environment. Among drivers and non-motorists, finger pointing at one another after a collision is common, as there is often confusion about who has the right of way on the road.

Behaviorist Perspective – How do the environment and experience affect behavior?

Behavioral psychologists believe that, for the most part, all behavior is learned or ‘conditioned’. When examining deviant driver behavior, a behaviorist will look towards a person’s prior conditioning as an explanation for the presence of those behaviors. Conditioning can take place in many forms and scenarios, often without the person’s awareness that learned behaviors are forming. An example of conditioned driver behavior could be choosing to drive over the posted speed limit or not. The East Coast of the U.S. is notorious for the fast-paced and aggressive driving style. Having some of the fastest posted speed limits in the country, it is not uncommon when traveling on the Mass Pike in Boston, for example, for drivers to travel 10, sometimes 20 miles over the 65 mph speed limit. Someone who grew up driving in this area would be conditioned to this type of driving style and would most likely adopt the same driving style themselves. Speeding would not appear to be unusual or even as dangerous driving because it is a regular part of their environment.

Interactions with social and cultural groups are the central area of study for socio-cultural psychologists. Culture and social norms play a large role in the development of cognitive abilities. Everyone learns, but how someone learns is unique to each individual because of their culture and other social structures. Social and cultural norms lie at the core of socialization; when a person is born, they adopt the norms of the family they were born into, their primary social group. Once they leave home, they form social bonds with friends, coworkers, and significant others, their secondary social groups. Each of these relationships and interactions have influence over a person’s ideology, beliefs, morals, and subsequently, his or her behavior. More information on this perspective and how it can influence travel behavior choices can be found in a previous post, Culture and Travel Behavior.

The cognitive perspective of psychology looks at the way a person interprets, processes, and remembers information and events to explain that individual’s behavior. When traffic safety professionals are developing educational material to promote a certain message, the point of view and level of understanding of their target audience must be taken into consideration. If the target demographic has an issue with authority figures, messaging that is centered on harsh penalties and enforcement may not produce the desired results. Individuals who tend to overestimate their driving abilities will not necessarily be affected by safety messaging emphasizing the dangers of risky driving behaviors.

Sigmund Freud is the most famous psychologist to discuss the unconscious mind and the psychodynamic perspective. One of the more controversial perspectives, psychodynamic or psychoanalytic psychology argues that human behaviors are a reflection of unconscious memories and thoughts. Experiences in our past, particularly childhood, that have been suppressed will manifest in different ways in adulthood as we begin to process those events. Freud explained that the three components of an individual’s personality – the id, ego and superego – were in constant struggle with one another and that what causes the display of unhealthy behaviors. Road rage is a behavior that could be examined under this perspective. Many drivers become upset by certain events during their commute but only some act on that anger in such a way that it becomes deadly. Could this be the result of the struggle between the id (impulsive desires) and the superego (rational thought)?

The humanistic perspective is unique in that it was developed in response to behaviorism (behavior is learned) and psychodynamic (behavior is a manifestation of suppressed memories) psychology and meant to challenge those theories. Humanist’s primary beliefs center on free will and the individual capacity for choice. Under this theory, humans are thought to be innately good and motivated by basic necessities. Abraham Maslow introduced the theory that every human as a hierarchy of five needs (physiological, safety, love/belonging, esteem, and self-actualization) and that an individual’s behavior is directly related to fulfilling one of those needs. Of all the perspectives, humanism is less focused explaining on abnormal behavior and more focused on what motivates a person’s happiness and personal growth. Traffic safety messaging leans on the perspectives in humanistic psychology when trying to appeal to viewer’s emotional side. Awareness campaigns that feature teens crashing after partying or texting their friends are designed to appeal to innate safety and security needs. Parents of teen drivers will want to protect them from the dangers of risky driving and teen drivers will want to control the level of risk around them by abstaining from these types of activities.

© Marisa Auguste and driversbehavingbadly.blog, 2019. Unauthorized use and/or duplication of this material without express and written permission from this site’s author and/or owner is strictly prohibited. Excerpts and links may be used, provided that full and clear credit is given to Marisa Auguste and driversbehavingbadly.blog with appropriate and specific direction to the original content.